The Washington Capitals have re-signed Nicolas Deschamps to a one-year deal, while the Hershey Bears have parted ways with Jon DiSalvatore.

Deschamps, who has been somewhat of an AHL journeyman over the past four seasons, will suit up for the Bears again next season after playing 21 games in Chocolatetown last year. In those 21 appearances, Deschamps scored four goals and six assists. Acquired from the Toronto Maple Leafs organization for defenceman Kevin Marshall, the 23-year-old Deschamps has appeared in 243 AHL games and has scored 41 goals and 81 assists.

DiSalvatore, who has spent the last decade in the AHL, says farewell to the league on his way to the DEL. An impact player in the AHL over his ten seasons, DiSalvatore has scored 236 goals and 323 assists over 797 games. However, no matter his production in the AHL, DiSalvatore has only suited up in six NHL games — five with St. Louis and one with Minnesota.

DiSalvatore, 32, will suit up with Germany’s EHC Munchen next year.

Peter Leblanc made an impression on the Washington Capitals organization, and because of it, he’s sticking around.

Leblanc, who split time last season between the Rockford IceHogs and Hershey Bears, has been re-signed on a one-year, two-way deal with the Capitals.

After being drafted in the seventh round of the 2006 NHL entry draft by the Chicago Blackhawks, Leblanc went unsigned until Rockford inked him to a deal that would allow him to split time between the Hogs and the Toledo Walleye, their ECHL affiliate. In his first 22 games in the ECHL, Leblanc had 22 points (8-14), and he hasn’t been back down since.

In his first season in the pros, Leblanc had 30 points (12-18) in 57 games, and it earned him an extension in Rockford. During the 2012-13 season, Leblanc set career highs with 24 goals and 20 assists in 72 games with Chicago’s top affiliate. It would also earn him an NHL contract, as the Blackhawks signed him to a one-year, two-way deal.

However, less than a year after inking the deal, the Blackhawks dealt Leblanc to the Capitals in exchange for future considerations. Leblanc would play the remainder of the season with the Hershey Bears, and help out to the tune of eight goals and ten assists. In the playoffs, Leblanc shone in Hershey’s first round exit, tallying eight assists in five playoff contests.

It’s beginning to feel like an arms race between the Syracuse Crunch and Hershey Bears.

After the Crunch opened up free agency with a barrage of signings, the Washington Capitals have gone out and inked three players that will help the Hershey Bears compete in the tough Eastern Conference.

It was announced today that the Caps had come to terms with goaltender David Leggio, defenceman Tyson Strachan, and forward Matt Watkins. All three players are expected to start the season in Hershey, and will spend most of 2012-13 with the Capitals farm club.

Leggio, 28, was one of the best goaltenders available to help bolster an AHL roster. The AHL free agency big board had Leggio ranked in the top ten, and he was the top goaltender available. By signing with Washington, it signals the end of a two year stay in Rochester where he played 123 games with the Amerks. It was in Rochester last season that Leggio put up career numbers, with a 2.56 GAA and .924 SV%.

Prior to landing with Rochester, Leggio had stays with the Portland Pirates and the ECHL’s Florida Everblades. In 2009-10, after he failed to make it out of the ECHL and up to the ‘A’, Leggio signed on in SM-Liiga with TPS, where he would help guide the team to an SM-Liiga championship, posting an insane 1.57 GAA and .942 SV% in 7 playoff appearances. The Buffalo, NY., native will battle for the starting position in Hershey, a spot that is likely his to lose.

Strachan, 6’3″, 225 lbs. native of Melfort, Sask., will come to the Bears after a stint in Florida last season. During the lockout, Strachan had the alternate captaincy for the Panthers farm club San Antonio Rampage, but when the NHL season began, Strachan found himself in the NHL. In 38 games with the Panthers last season, the 28-year-old had 4 assists and 40 PIM.

At the AHL level, Strachan is an intimidating force on the blue line that can move the puck and fill a top-three role for the Rampage defence. While he may see a few games in the NHL, Bears fans should look to see Strachan in the lineup for somewhere between 50-65 games this season.

Maybe the most unheralded of all three signings, Watkins, a 26-year-old from Aylesbury, Sask., is the kind of player that can help a team get to the next level. Last season, while a member of the Bridgeport Sound Tigers, Watkins took over the captaincy and added 11 goals and 19 assists. He may not be the most offensively gifted, but Watkins will still be good for a point or two every couple contests. Over his AHL career, the University of North Dakota product has amassed 49 goals and 74 assists in 253 games.

After six years in Chocolatetown, Patrick McNeill is heading to Springfield.

The Columbus Blue Jackets announced they had signed the 26-year-old McNeill yesterday, and it will signal the end of the defenceman’s run in Hershey.

In 356 games with the Bears, McNeill put up 38 goals and 128 assists, and won a Calder Cup in 2009-10. In their run to the Calder Cup, McNeill had three goals and three assists in 11 games. Though McNeill spent significant time on the sidelines last year with injuries, he was still able to put up 17 points (4-13) in 47 games.

A fourth round selection in 2005 by the Capitals, McNeill is an offensive defenceman, and will see minutes on the Barons PP. With Justin Schultz up in the NHL, the Barons will need someone to quarterback their powerplay, and McNeill could be just that man.

McNeill’s contract is a one-year, two-way deal that will pay him $600,000 in both the NHL and AHL, according to CapGeek.

After spending nearly his entire professional career with the AHL’s Manchester Monarches, David Kolomatis is going to be suiting up for the Hershey Bears.

Kolomatis, who joined the Monarchs as a 20-year-old in 2009-10, had been a fixture on the clubs blue line, but is moving on to a new opportunity. In 300 games with the Monarchs — which includes his 46 playoff appearances — Kolomatis has put up great numbers, proving his status as a playmaking defenceman. Over that span with Kings affiliate, Kolomatis had 29 goals to go along with 81 assists, and brought the Kings organization great value for a fifth round pick in 2009.

In just 46 games last season, Kolomatis tied a career high with 8 goals and fell one shy of a career high in points with 28. Previously, the blueliner had put up 29 points (8-21) over a span of 76 games with the Monarchs.

Signed to a one-year, two-way deal, Kolomatis will likely see minutes in the top-four of the Bears D. 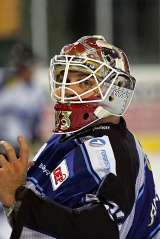 Two veteran AHL netminders are heading to Europe, freeing up spots in their former organizations.

Barry Brust has reportedly signed a deal with the KHL’s Medvescak Zagreb after spending the last season in Abbotsford. Brust playing in 35 games last season, with a 2.50 GAA and .911 SV%. A Calder Cup champion in 2010-11 with the Binghamton Senators, Brust will be on his second stint in Europe after spending a year in Germany with DEL’s Straubing Tigers.

In addition to Brust, journeyman goaltender Dany Sabourin is also heading across the pond.

Dany Sabourin will get a shot at a full-time starting role in Austria next season.

After his three year tenure in Hershey — where he played in 78 games — Sabourin is headed to the Graz 99ers of the Erste Bank Eishockey Liga.

The Graduate is an American Hockey Blog feature that highlights a notable AHL alumnus, their career, and what makes them so special to AHL lore. It also happens to be the title of a 1967 film starring Dustin Hoffman, which has been praised by the American Film Institute. These things are not related.

For most modern hockey fans, the lasting image of Bruce “Gabby” Boudreau includes a smattering of barbecue sauce, but the Anaheim Ducks head coach is an American Hockey League icon.

Boudreau, primarily a centre throughout his playing days, began his professional career in the 1975-76 season as a member of the Minnesota Fighting Saints of the World Hockey Association. Boudreau played a mere 30 games with the Fighting Saints, managing three goals and six helpers. The next year, Boudreau would make his NHL debut with the Toronto Maple Leafs, but his inability to stick with the big club would lead to the beginning of an illustrious minor league career. END_OF_DOCUMENT_TOKEN_TO_BE_REPLACED